I woke up early the next day and walked over to where you could overlook the ocean for my breakfast. I have been waking up early in the mornings, around 6am, because of jet lag. I was pleasantly surprised to see that the fog from the night was still lifting off from the ocean and mountain valleys. It was lovely to watch.

Shortly after breakfast, Patrick and I headed off to Karekare, a 3 hour drive from Raglan. The drive was easy and fun. I learned all about Patrick’s travels through New Zealand. He actually hitchhiked most of his trip, which I was very impressed by. In America and a lot of the rest of the world it is extremely unsafe to do so, and even more terrifying as a female. He told stories of the wonderful hospitality he received from the kiwis. Sometimes they would even invite him for dinner and sleep at their house.

When we arrived to Karekare we headed for the beach for lunch. The beach was gorgeous with black sand and giant rocks in the middle of it. Just a side note: if you ever go to a beach with black sand make sure to wear shoes because the sand burns your feet off.

I had heard from a travel website about a 45 minute hike in Karekare that was supposed to have incredible views and a waterfall. So, off we went. 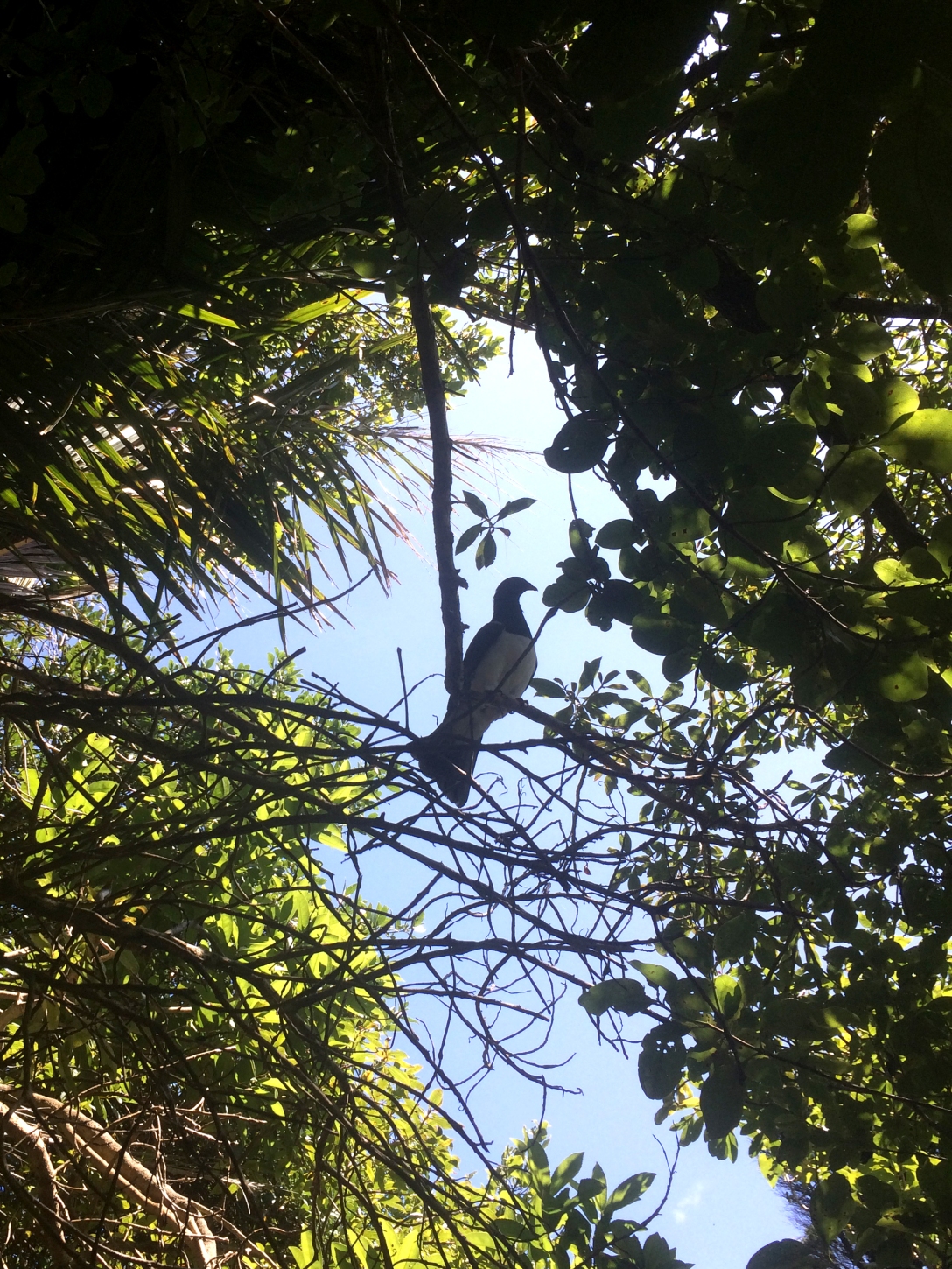 The first part of the hike was a steep climb and it was scorching hot, so when we reached the vista I was dying of thirst. I reached for my water bottle to find that my bottle was only halfway full. Having a good supply of water on hikes is the number one hiking rule. It is crucial, especially when it is very hot outside. I drank about half of what I had and decided I would be okay for only a 45 minute hike. 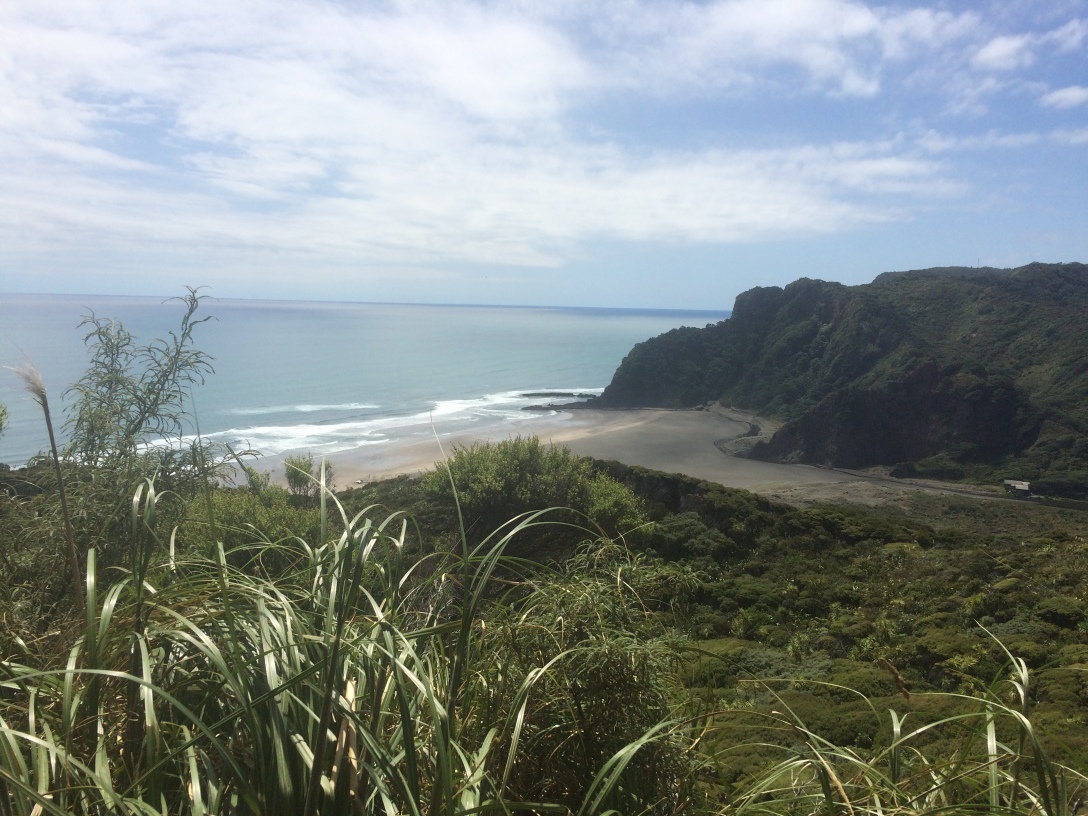 We kept climbing and climbing, and I felt like I was bathing in my sweat. My mind was mostly distracted from my body because of the incredible views. When it looked like we could climb no higher we saw a sign that said our next point was 1 hour away (meaning another 1 hour to get back). I was very confused because the hike was supposed to be a 45-minute loop. I thought of turning back because of lack of water, but we had already gotten so far and there was supposed to be a really pretty waterfall with a swimming hole. Luckily I had a big mango during lunch so my blood sugar seemed to be stable.

On we went. The hike began to get easier as we started descending. We walked through jungles and came out onto viewpoints of the ocean. The breeze always felt fantastic when we would come out of the jungle. After the next set of hills to climb, I couldn’t take it anymore. My mouth was so dry and I had to drink the rest of my water. I noticed that I was stumbling a little bit and saying really funny things. I felt giddy and high as a cloud. In the back of my mind I was starting to get very scared.

We finally reached our next point and started walking down a road. I was joking with Patrick, who also ran out of water by that time, that we should hitchhike for water. He took me seriously and he flagged down the next car. At first I was terrified that he did that. In the United States you just really don’t do those sorts of things. But, when a happy woman popped her head out of the car and asked how she could help us, I felt a lot more secure.

Her name was Josie and was a local of Karekare. She was a delightful woman and immediately started chatting away about everything you can imagine. When we told her about our situation she offered to take us to her house so we could fill up on water. By that time the world was spinning and water had never tasted so good in my life.

Her house was tucked back in the jungle and had a peacefulness about it. Josie lived on her own and was retired. She decorated her house with all kinds of beautiful artwork, mostly made by her daughter. We sat and talked with Josie for a while. She offered us tea, snack, soda, to stay and enjoy her hot tub, to stay for dinner, and eventually offered us to sleep at her house in her 2 extra bedrooms. We couldn’t decline.

Before dinner we picked up my car and drove to the waterfall we wanted to see on our hike that was only a minute or so from her house. It was beautiful. 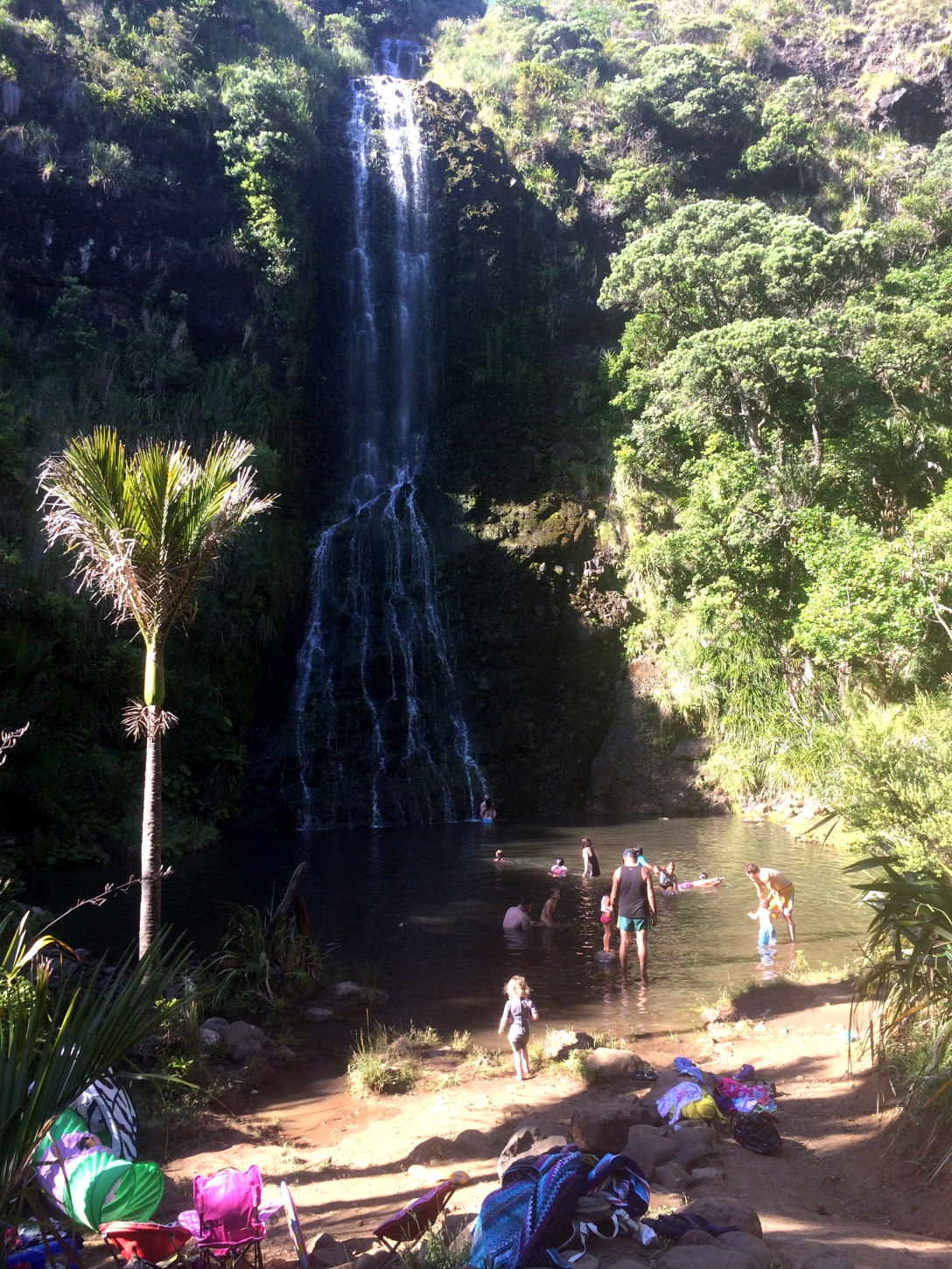 Dinner was delightful. She made an elaborate salad with veggies from her garden, sausages, roasted vegetables, and delicious smoothies for dessert. I was awestruck by the hospitality we were given. After dinner she showed us glowworms in her yard, which I was very excited about, chatted for a bit, and I slept hard as a rock for the rest of the night.

Lessons learned: Bring a ridiculous amount of water on hikes, kiwis are amazing people, and if you see 2 hitchhikers on the road who look safe, it’s not a bad idea to pick them up and offer them such hospitality as Josie did.